Stacy Julian, a long-time friend and incredibly successful business woman, wife and mother of 5, was generous enough with her busy schedule to read and review my new book. I’ve pasted the review below as well as the link here: http://www.stacyjulian.com/blog

When Geoff and I moved to Chicago, IL in 1990 (so that Geoff could attend the Loyola Stritch School of Medicine we had been married just barely 6 months. We moved into an apartment in Forest Park and I was very eager to go to church and hopefully meet some friends. On the very first Sunday attending the Westchester ward (congregation) I saw a young father that looked familiar to me. Either that day or very soon after, we met Roland Nelson and his wife, Julie. Turns out Roland had lived in an apartment building very near one that I lived in at BYU, so I undoubtedly saw him walking to and from campus. Anyway, when we met, they seemed so “old” to me. They had been married 8 years and they had 2 children. I remember thinking, “Wow. I wonder what it will be like to be married that long and have children!” Julie was very welcoming and before long we were invited to dinner. As I got to know Julie better, I watched her closely. I liked the way she did things—I watched her relationship with her husband and I watched how she cared for her children. I was two thousand miles from my home and parents, and spent a lot of time alone, as Geoff was busy with school and studying. I was impressionable and I admired Julie a great deal. In 1992 I found out I was pregnant, which was a bit of a surprise, since we had planned to start our family closer to the middle or end of 1993, so that Geoff would be almost finished with medical school. Clark came in February 1993 and I needed to continue working full time to help support us. This meant I also needed to find someone to watch my baby, which especially with your first child is an overwhelming thought. Julie ended up being one of the people that tended Clark for me. I don’t remember all of the details, but I believe she watched him two or more days a week. I also remember that I wished she could watch him full time, because I knew her home was a wonderful place to be. She was kind and loving, but also confident and capable. I knew that she was not just watching Clark, but teaching him and disciplining him in a way that I approved of. I wanted to parent like Julie did. Anyway, the point of these recollections is that my wonderful friend Julie has recently authored her second book on parenting. After Julie left Chicago, she managed a large day care facility and eventually got her masters degree in marriage, family and human development. Oh, and she also had three additional children and continued to manage her own home.

It’s been extra fun to read Julie’s book, because I can hear her voice. She is funny and real and she uses personal stories to illustrate principles she is writing about. She reached out to me on Facebook to see if I would read her book and tweet about it, or share it in some way and now that I’m (nearly) done I want to do so much more. 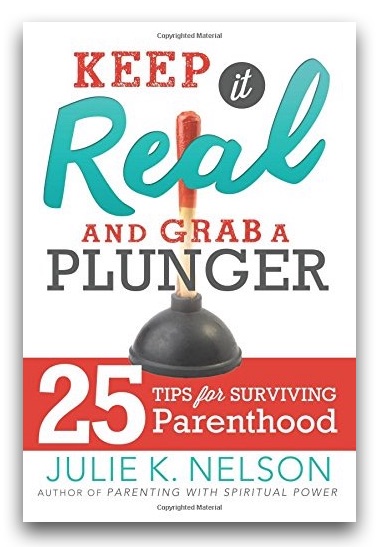 This book is 100% AWESOME. I’ve been reminded of things I know and need to do better, I’ve felt inspired to implement new ideas and with each chapter I find myself feeling really positive about my desire and ability to improve. I think that’s most likely the goal, right? Sometimes you read (especially with marriage and parenting books) information and feel like “I just kind of suck!” You know? But that’s what I like most about Julie’s book. She is real. She uses humor and candor. She is clearly very intelligent and has done the research, but she just talks to you, as one who understands. She is, most importantly, a mother, who has been there and actually still is there. She’s like me. We’ve both “launched” a kid or two, but we still have a long way to go and so when you read, you get this very helpful mix of what’s proven and what’s practical. I find myself saying, “I need to try that!”

One of my favorite chapters is about family dinners, which with teenagers is something I really believe in. On many days, sitting down to dinner together (as difficult as that can be) is the ONLY time you will see, let alone talk to your teen. Julie reminded me of the things I already know (no electronic devices) but sometimes do not follow through on very well. She also gave me some great ideas for “Reprogramming the Script” which is needed, especially with teens, when conversations can become too much about homework or other unappetizing topics. She talks a lot about turning on your parenting power to influence your children in powerful ways. For example, you can make a secret goal with your spouse to sneak in at least one compliment to each child during the meal. Or you can increase a sense of awareness for each other by doing something a bit more intentional. I loved this idea:

A photo I took in 2007 when we made the effort to see the Nelsons on a trip to Utah. Our families had done some changing in the intervening years!

I’ll end by sharing one other bit of wisdom. In the “Keep it Real and Call Your Grandma” chapter, Julie advises channeling your inner (or future) grandmother. In other words, at the brink of meltdown madness, try to step back and imagine what your grandmother would say or do. Grandparents are kid experts, they have survived the tough years, learned to overlook the stuff that won’t matter and relish in the little things that will. She says,

As a scrapbooker, I’ve learned and used this approach many times, with toddlers and now teenagers, and I’m grateful for every single photo that has possibly prevented a less appropriate response.

I’m delighted that Julie sent me her book and that I can now recommend it to you.