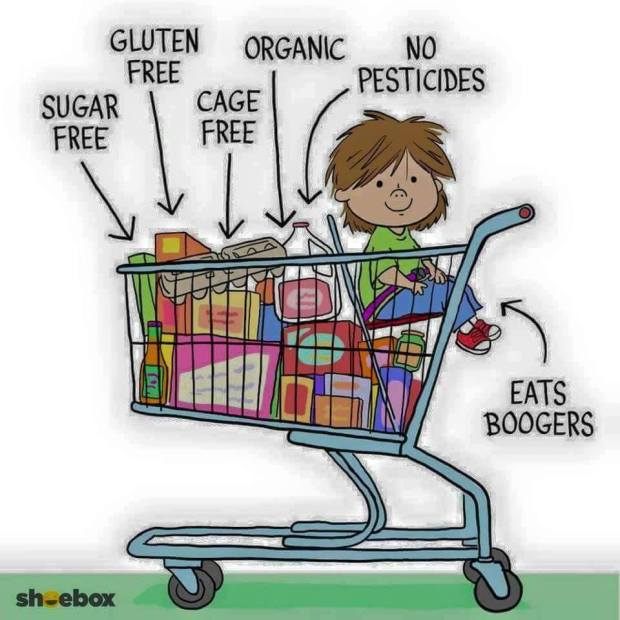 There’s this expression, “Out of the mouth of babes” that has been adopted into our vocabulary to illustrate the wise, wonderful things young children say. Recently, I heard from parents on social media that the things their kids do will cause them (the parents) to say the most outlandish things. Things they would never have imagined saying in their pre-parent (sane) life, the time when they said and did mature, intelligent, socially-acceptable public acts like, “Pass me the Grey Poupon, would you please?” Behind private doors is another matter when you are raising an untamed, uncouth child and hope to one day present it to the world as a genteel adult with manners that won’t make you cringe.

As I’ve always said, pushing each child out into the world caused me to burst a few million brain cells, never to be recovered. I have lost my memory and my mind. I have said some of the most ridiculous things such as, “Don’t stir the toilet with your toothbrush.” As one mother shared, “When I said, ‘Come here and let me smell your butt,’ I knew my life had become very weird.”

Here’s a short list of weird things parents have said to their children:

Don’t stand on your sister

No peeing on people (or the sink, the bike tire, or the porch)

Don’t fart on your brother’s head

Get out of the dishwasher

Don’t put your feet in the donut box

Don’t start with the flamethrower

No, you may not bite my toe

No, honey, his boy parts are not jingling; that’s just keys in his pocket

Poop is NOT mud for your monster truck

Stop dancing with the vacuum

Don’t throw up on your sister

No, the cat does not want your dirty diaper

How many times have I told you; you can’t poop in the backyard

Don’t drink the bathwater your brother peed into

You need to wear underwear to the dinner table

Don’t poke the dog’s eyeballs with a fork

Why did you give the TV a bath?

You can’t wear hats as shoes

Don’t take a picture/video of your poop

Stop sword fighting with your penises

Don’t smother your brother in the couch

Why did you poop on the floor?

We do not feed the baby our boogers

Get your head out of my butt

Don’t fill up your pants with Legos

Don’t eat food that was in your underwear

I just want to poop in peace

Yes, your poop comes out of a hole in your butt

What happened to the other half of the hair gel?

Only pick your own nose, honey

Don’t wipe your boogers on your sister

We don’t eat things that move

Stop slapping your [bare] booty and get dressed! Yes, I know it makes a cool sound but we have to go to church

Stop drinking out of the toilet

Gross, stop putting your toes in your nose

Why are you on the counter…naked…eating cupcakes?

Get the toilet seat off your head

I know what poo looks like; you don’t need to show me

We don’t drive cars on our penis

Why is there a box of Pop Tarts in the shower?