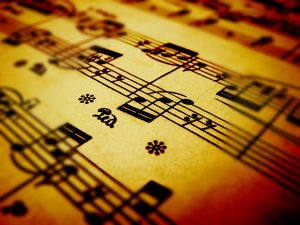 I once took my toddler to a classical concert wearing nothing other than Ninja Turtle underpants.

Well, let me back up.

My husband and I were living in Chicago, Illinois and had two young children at the time: a son, who was five and a daughter, who was about two years old. We often took advantage of attending cultural events that were so abundant in that area. Our stroller was very familiar with toting children around museums, parks and arts shows, and to Broadway theater, symphonies and concerts. We didn’t want to let kids slow us down!

One December, my husband and I made special plans to introduce our two young children to the ageless beauty of Handel’s “Messiah.” Taking a five-year-old and toddler to such an classy event might seem overly ambitious to other (sane) parents, but we thought nothing of it. We were cultured people, after all, passing down our love of classical music in its highest forms to our posterity.

I dressed my children in their Sunday best, putting my daughter in a particularly frilly pink dress with matching hair bow, white tights and buckled shoes. I hadn’t finished her laundry that day and she didn’t have any clean underwear (you know how many pairs of underwear you go through in the potty training stage?). So, being the resourceful mother that I am, I put her in her older brother’s underwear (Ninja Turtle, of course), rationalizing that no one would see them under her tights and fancy dress.

It took about 45 minutes to drive to the building where the concert was held.  My husband pulled into the parking lot and parked the car; I got out and opened the back door to unlatch my children and take out my daughter from the car seat. Just as I lifted her out, she threw up all over herself. She is very prone to carsickness and unfortunately, that drive just happened to spill the beans, so to speak.

I want to remind you also, that winters in Chicago are brutal. So we were standing in a blizzard in a parking lot with a toddler dressed in pinkish throw up. Do you just turn around and drive home? That might have seen like a viable option to other (sane) parents. But we weighed our options through chattering teeth:

1. Drive home for another 3/4 of an hour with the ripe smell of vomit and a crying daughter.

2. Go inside and try to clean her up and then drive back home.

We’re not dumb, so we went for #2 which meant we’d have a clean daughter, but would all miss out on the once-a-year, much-anticipated “Messiah” concert and waste our tickets. Why not just stay, I suggested (option #3). We might not have been dumb, but parents are desperate sometimes, and we desperately wanted to see and hear the concert. So I undressed her…whereupon I realized in stark dismay that she had on her loosely-fitting brother’s underwear. Doh! I quickly covered her up in her coat and called it good. Haute couture for concert-going two-year-olds.

Then the real trouble happened. During the concert, our toddler wiggled out of our arms, escaped through our legs and ripped off her coat. You saw that coming, didn’t you? Picture this: a little girl running up and down the aisle wearing nothing but Ninja Turtle underwear that fell down to her ankles as we sat in horror while the choir sang, “Unto Us a Child is Born.”

I think we finally retrieved her under the cold stare of strangers. I don’t really remember. Parents have selective memory loss after traumatic events like childbirth and “Messiah” concerts with children running naked. It’s why we’re dumb, desperate, and yes, completely insane.